Message
OK
Return
Login
Sign Up
Username *
Your login must contain between 3 and 20 characters.
Only Latin letters, numbers, hyphens and underscores can be used.
Login already in use
First Name *
Last Name *
Email *
There is a mistake in your email
E-mail already in use
Password *
Your password must contain from 6 to 23 characters
Your login and password are too similar
Confirm *
The passwords do not match
Country *
Postal Code
Birthdate *
Promocode
* Required fields.
SIGN UP
Change nickname
Welcome to BetVoyager!
Welcome aboard mate! Here at BetVoyager we strive to offer the best features anywhere in online gaming.
Try our special No Zero Roulette, the only roulette in the world with real equal odds during gameplay.
To receive any bonuses you must enter your cell phone number cell phone number.
DEPOSIT
PLAY NOW
BetVoyager Deposit
Please choose a gateway for payment:
Sum in RUB:
Minimum deposit sum is € and maximum deposit sum is €
We would like to remind you that you may need to for certain promotions.
For your information, when transferring funds using a credit/debit card, you may be required to present documents which confirm that you are the owner of the card.
DEPOSIT
PROCESSING ...
?
LOGIN
loading...
0
SIGN UP
DEPOSIT
Games Fair Play Promotions Lottery How to launch
€ loading...
DEPOSIT
Language:
Games
Popular
Equal Odds
Mobile
Roulette
Slots
3D Slots
Poker
Video Poker
Blackjack
Other Games
Fair Play
Promotions
Payment Rules
General Rules of the Games

This is one of the simplest card games at BetVoyager Casino. However, our online casino has introduced some special features in order to increase players' payouts when they play casino war online.

The game uses six 52-card decks, and cards are assessed according to their face-value, with the Deuce being the lowest and the Ace the highest. Suits have no meaning.

The player makes a bet on one or several boxes and the dealer deals one card on each box bet upon and one for himself. All cards are dealt face-up in this casino card game.

In addition to basic bet in this casino game, the player can bet on a tie before the deal. If both the player’s and the dealer’s first cards have the same rank, this bet is paid 10:1.

Our Specific Rules for Casino War 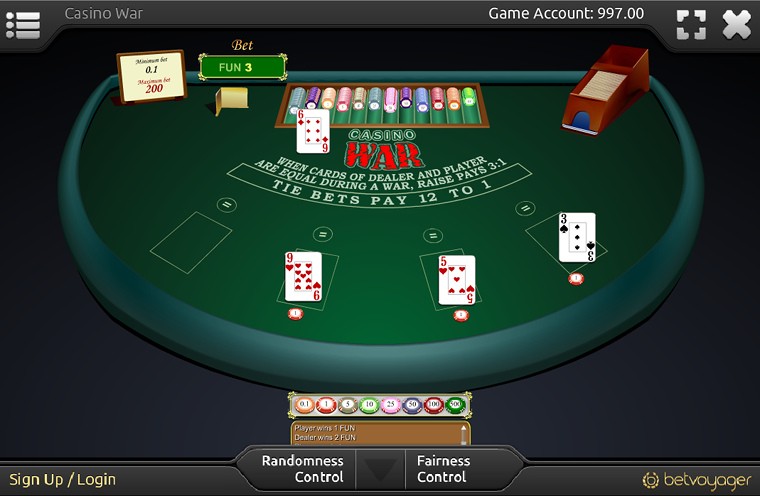 Additional Information about how to play Casino War online

The player can play on up to four boxes. The minimum and maximum bets are indicated on the game table. The bet on a tie must also fall within this range; its size bears no relation to the basic bet.

To make a bet, it is first necessary to choose a chip with the desired face-value. At the beginning of the game, this chip is chosen by default, and the chip with the minimum face-value fixes itself onto the cursor. If the player wants a chip with a different face-value, he can select it by clicking on that chip with the cursor. The player can also use the scroll wheel on his mouse to change the chip’s value. After the chip is selected, the player can place a bet by clicking the mouse on the desired part of the game table and his bet will appear there. Each subsequent click adds another chip of the selected face-value to the bet. If the player wants to remove the last chip from his bet, he can remove the chip fixed onto the cursor by clicking the cursor on any empty part of the game window and then clicking on this bet.

The "Clear" button can be pressed to remove all the bets from the table. If the player wishes to repeat his bets from the previous hand, he can press the "Rebet" button. The "Deal" button will begin the game after the bets have been made.

If the player’s original card is equal to the dealer’s one, the player has two options:

These actions are performed by pressing either the "Surrender" button or the "Raise" button, respectively.

Cards are shuffled before every hand in our version of Casino war.

In addition to games, BetVoyager also has a wide variety of promotions such as; deposit and no deposit bonuses, Tournaments, Free Event Lottery, Free spins, Free money, and other types of promotions.

BetVoyager is always looking to improve. Whether it is creating real cash prize tournaments with real cash prize funds, or generous bonuses or free spins, BetVoyager is always looking to enhance a player's gaming experience. Additionally, we also want to make sure the player has a safe and fair gaming experience. For this, BetVoyager has developed a unique Fairness Control which provides a 100% guarantee that the casino is fair.